If rebirth, karma, or any God exists, do you think science will ever discover it? Or will you think it will not be likely to happen because scientists don't believe in them?

Gods exist? or not? one or many? — let’s clear it first

Human beings in the world have made many names for God and claim that name of their God is true, but when asked for proof, they resort to their religious books to tell stories and events of the past which never ends when religious debate begins while I believe if there is a God in the universe, he should present miraculous proofs of his own existence for his true religion and its true followers in order to expose the reality of imaginary gods, to expose false religions and the truth should be revealed naturally and miraculously because it is not possible for God to be present and unable to show proof of His existence and the one who cannot show proof cannot be God even if he is one or many.

Believers of all religions die claiming the truth of their own religion but in the world do they have invincible proofs other than words, stories and books to prove their God and his control on nature? If so, which ones? If not, why not?

As far as death is concerned, what is the reason that after death there is a difference in the laws of nature against the established science principles on the bodies of human beings and why there is no such difference in the deaths of followers of other religions other than the one exclusively?

Take, for example, this Muslim girl whose dead body is preserved through nature under her grave without any chemical and embalming in fresh and sleep-like condition.

And also take example of this dead body of a non-Muslim who had been decomposed through nature but then preserved manually with chemicals, wax and mummification process by religious and medical experts.

If God is happy from all religions then all dead people of all religions should be preserved through nature but there is a clear and major difference.

However, it does not happen in real world and above proofs are given.

And do not say of those who are killed in the way of Allah that they are dead; they are alive even though you have no knowledge of their life.

And never think of those who have been killed in the cause of Allah as dead. Rather, they are alive with their Lord, receiving provision,

Rejoicing in what Allah has bestowed upon them of His bounty, and they receive good tidings about those [to be martyred] after them who have not yet joined them - that there will be no fear concerning them, nor will they grieve.

Allah has claimed through Quran that Muslim Martyrs are alive and we can see that in real world Allah is practically preserving dead bodies of his Muslim martyrs after their death without any human intervention.

If Allah doesn’t exist then WHO preserved that Muslim girl?

We cannot say that it is done by Muslims because Muslims don’t use chemicals and embalming for protection of their dead bodies as per Islamic law and regulations while scientists and medical experts of National Geographic team did not represent any report against fresh dead bodies of Muslims unlike they’ve provided proofs against corrupted and manual mummified dead bodies from non-Muslims.

So it is clear here that non-Muslims are preserving their corpses through manual work with scientific instruments, medicines or other techniques but Muslims don’t.

Here is another Muslim Martyr whose dead body is in fresh condition with fresh blood even after several days in a cold weather without any human intervention.

If Allah is not God then who prevented and stopped decomposition process on dead body of above Muslim martyr?

Here is third example that dead body of this Sunni Muslim named Allama Khadim Hussain Rizvi is in intact fresh condition for 2 days in open air without odor and no decomposition process happened in front of thousands of eyewitnesses in Lahore, Pakistan.

If Allah is not God then who prevented and stopped decomposition process on dead body of above Sunni Muslim?

So according to above evidences it is very clear that Allah is performing practical preservation for his true Muslim followers of Islam by Himself without any intervention of Muslims.

And it is also clear with proof from National Geographic Channel report that non-Muslims are using chemicals and embalming for manual preservation of their saints then they display them in public to claim as divine intervention and sign of holiness which is in fact not true. 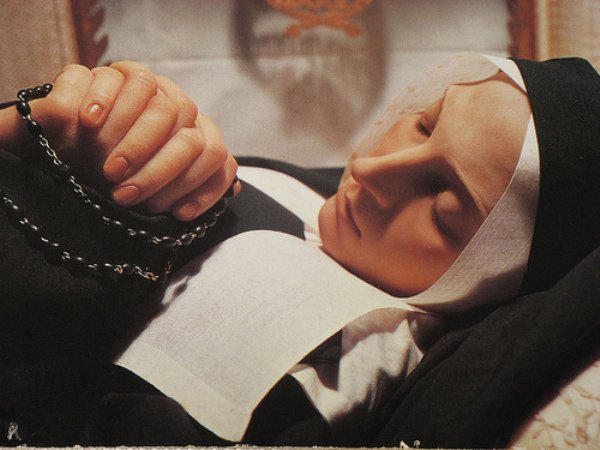 Also Read: The Incorruptibles (by Brian Dunning, An Atheist)

Even atheists have exposed and busted myth of incorruptible dead bodies claimed from non-Muslims therefore in the light of evidences and real world proofs it is proven through nature that Allah is demonstrating real miraculous acts against the laws of established science and not yet refuted by scientific researchers and medical experts of National Geographic.

Therefore, Allah surely exists and He is the God who has been worshipped by the Muslims in all over the world but there is no proof on existence of imaginary gods from real world that they are changing laws of nature for their dead followers by their own power against the established rules of science.

Therefore, regarding what you asked “do you think science will ever discover it?’

Now if we need to study about re-birth and karma then it can easily be done according to the teachings of Islam.

It can be valued and considered because only Allah has been showing his existence through changing laws of nature in real world in the 21st century for the mankind to see what’s happening with believers of Allah.

Will you think it will not be likely to happen because scientists don't believe in them?

People who study science are not even agreed on many of their own conflicted rules in the name of science then how can they be agreed for the area where their science knowledge cannot work?

So it does not matter if they believe or not since many scientists are themselves living in their limiting beliefs and favor their own by birth religion over real world facts so we can leave scientists to live the way they want whether they believe or not but the fact that Muslim martyrs remain fresh without using any chemical cannot be changed with claims unless practically proven wrong with scientific researcher done.

Let see when National Geographic, Discovery or other scientific experts will arrange their teams for intact dead bodies of Muslim martyrs which are preserved only by the power of Allah the God of Islam.