If you look at what is written when you search “boat of nuh proof”, then this is what shows up

According to it non-Muslims made following claims

Quran has statement that “It came to rest on the Judi” (Translation 11:44)

However, the Bible has statement that “And on the seventeenth day of the seventh month the ark came to rest on the mountains of Ararat.” (Genesis 8:4, NIV)

So in the light of above proof, Mount Ararat is different than Mount Judi.

Further, here you can see that Quran specifically mentioned the name "Judi", and Bible does not have any name except mountains so which mountain? There are so many mountains, therefore it is clear the person who wrote Bible does not even know where exactly the Noah's boat was landed.

It means that if Quran is true book of creator of Jesus, Universe, and Nature then Judi should match with Noah’s Ark for the information and research in the 21st century regardless of absolute physical proof of real boat in its physical form (which is obviously not possible since thousands of centuries later from the time of event happened in this world)

From the National Geographic, it is also confirmed again that Christians explorers still don’t know about Mount Judi while the Prophet Muhammad ﷺ of Islam informed this name Judi 1400 years ago before this 21st century of modern science & technology, then how and who informed this name Judi to Prophet Muhammad ﷺ because even Christians don’t know about it and the name Judi is not even specifically mentioned in the Bible?

Here from the World History Encyclopedia, it is a practical proof that “Mount Ararat is located in present-day eastern Turkey very close to the border with Armenia” 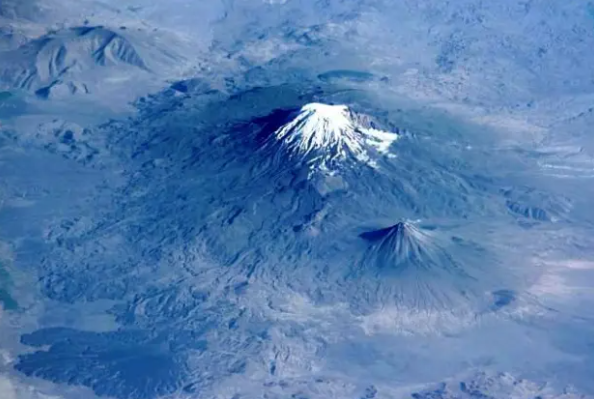 And here is Google Map view for Mount Ararat 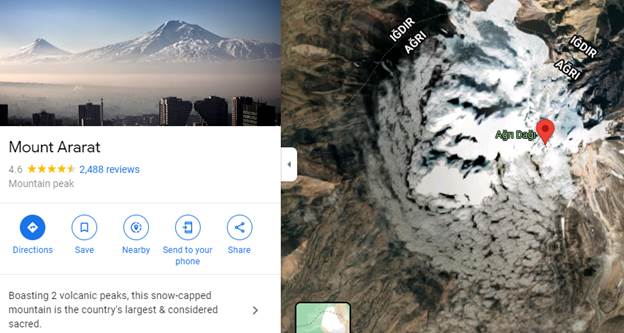 So let see where is Mount Judi located then? :)

By the way the Al Judi is called Mount Cudi in Turkish, where the Turkish “c” is pronounced as an English “j” (pronounced “Judy”). And Muhammad ﷺ claimed to be Last Prophet of Allah 3,000-6,000 years after many biblical scholars believe the great flood occurred and the ark landed so the Mount Judi (Turkish Mount Cudi) should be truthful in relation to evidences for Noah’s Ark.

And as a reminder, note that the bible does not specifically say, Mount Ararat, there is stated “mountains of Ararat” which is ambiguity statement and if the Bible is 100% words of God then the God cannot do such mistake while on the other hand Prophet Muhammad ﷺ specifically stated word “Judi” through Quran (and of course revealed to him by Allah the God according to Islam)

Agri vs Cudi, OR - Ararat vs Judi

Here is the Google Map for Mount Cudi 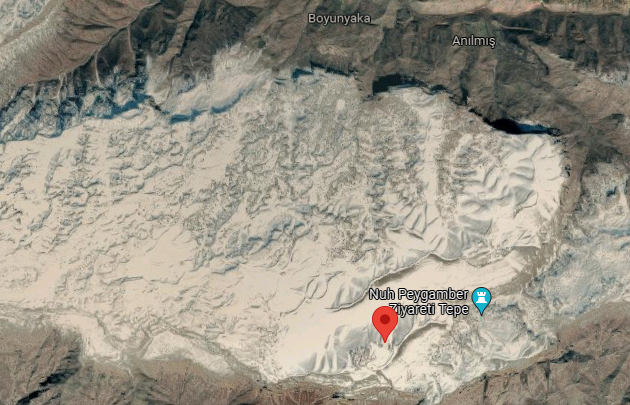 Do you see something special in above Google Map?

If not then, here is a bit closer view. 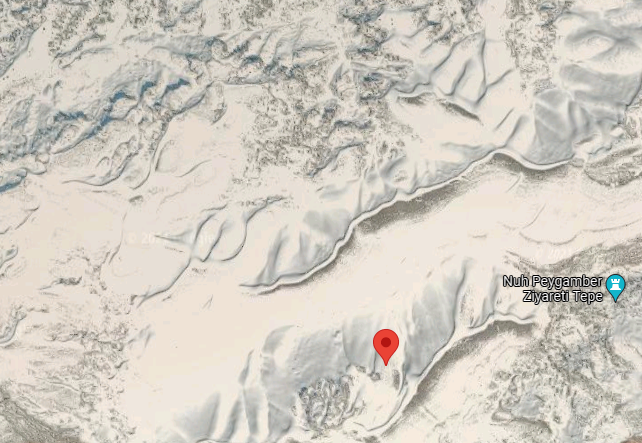 Do you see something special in above Google Map now?

If not then here it is with more zoom view. 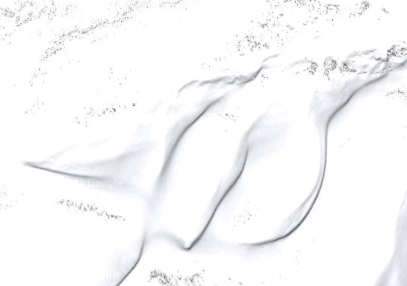 It is the name of ALLAH written naturally in Arabic اللہ and following is highlight version of former Google Map image. 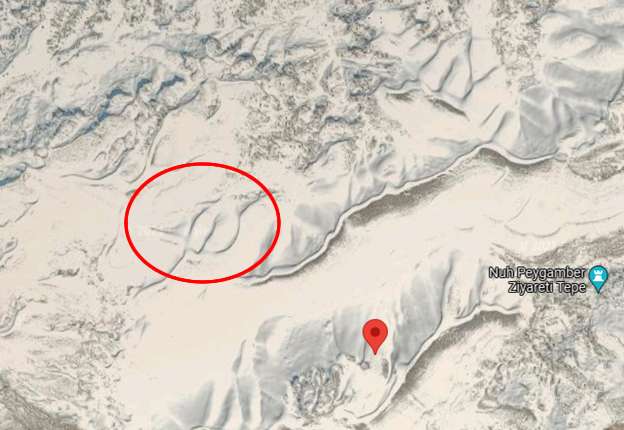 No there is not and all world scientists of non-Muslims cannot prove that Prophet Muhammad ﷺ wrote this name because they do not have any practical proof.

But here is now practical proof that Mount Cudi had been marked by Allah in Arabic with his name اللہ through Nature, so this is a practical, neutral, observable and irrefutable proof now.

Since you cannot refute that name of Allah in Arabic is not written, it is a practical proof through Google Map from real world of exact location of Judi and name Judi that was mentioned in the Quran 1400 years ago revealed to last Prophet Muhammad ﷺ about Noah's Ark so it confirms that event was 100% true and real and Quran is 100% words of God, who is only Allah. 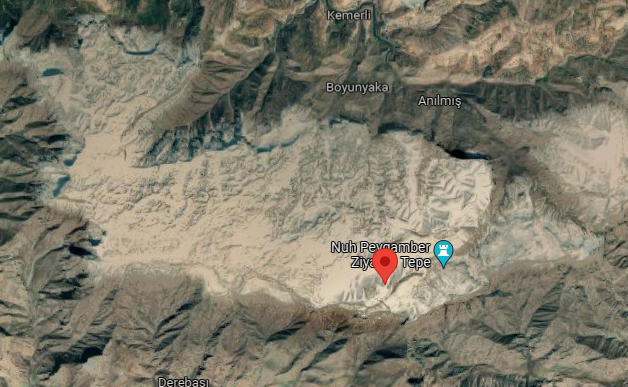 If you use common sense then it is pretty clear whether there is a physical boat now or not, but Judi has a shape like representation of a ship.

And the signature of Allah’s name in Arabic اللہ is a divine sign and miraculous signature as stamp on this location Judi, which is proved in the 21st century by the mercy of Allah the Greatest, the Perfect Knowledgeable and Creator of the universe.

It also proved that Judi was 100% true in Quran, and Prophet Muhammad ﷺ was revealed this name by the ONE & Only who is no one but Allah whose name is naturally written on Mountain Judi, so who wrote it?

Obviously, not done by last Prophet Muhammad ﷺ at all.

Indeed, Allah creates and writes his name by his power and command and He has done it so many time through various creatures of nature in the 21st century.

All praise to be for Allah.
All powers belong to Allah.

Allah told about Judi 1400 years ago to his last Prophet Muhammad ﷺ through Holy Quran and Allah revealed his name through the Nature (earth) on Judi which is an observable, practical, physical, neutral, solid and absolute proof that Allah is King, Creator and True God of Nature.

And here is practical video of the Judi so that you can't miss it in future if Google Map does not show it by any technical manipulative attempt by the non-Muslims who don't like truth of Islam to be revealed openly with divine proofs.

So if you're still a disbeliever then will you enter in Islam now and stop worship man made gods and cancelled religions?

If yes, welcome to the true religion Islam of true last prophet Muhammad ﷺ of true God Allah and become a Muslim Now.

Shahada Step By Step Lesson (How To Covert To Islam)

After becoming a Muslim, please keep in mind that you don't need to care statement and claims of those Muslims scholars against the name of Allah in Arabic اللہ through Nature who have no idea what are they talking about to mislead mankind with their limited knowledge about practical proofs on existence of Allah through Nature.

Since these kind of Muslim scholars don't have any awareness and importance regarding how only Allah practically writes and demonstrates his name through Nature and since there is no God therefore man-made gods can never write their names through Nature.

You've now seen how Allah practically wrote and signed his name through Nature for the location of Judi, which He mentioned in Quran 1400 years ago, and revealed a divine sign on Judi, fair enough sign in the 21st century by the mercy of Allah for those who think wisely with their open mind and heart and can use their common sense to embrace the truth.

Now teach and preach about this to other non-Muslims too if you've become a Muslim so that they can also save themselves from painful punishment of hellfire and won't live in their darkness of life by not knowing that Allah is their real God and creator.

Indeed, name of Allah in Arabic اللہ through Nature or name of Muhammad in Arabic محمد through Nature, both are practical, solid, observable, physical, neutral, natural and irrefutable proofs on Allah being the creator of the universe and Muhammad being his last prophet forever.