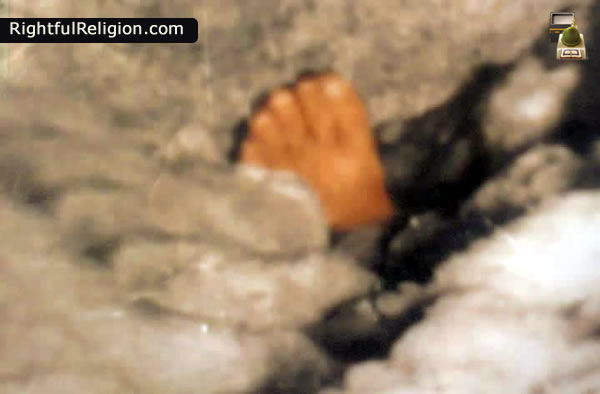 The dead body of Sheikh Ayyub Tahir Kurdi is still in fresh condition since centuries in his grave and his foot is out from grave and the people of Damascus confirm about it too. It is very dangerous to travel to Syria in current time (2016) due to war condition. I'm sharing here information with you that I gathered after doing research for several months.

Farid-e-Millat Dr Farid-ud-Din Qadri is the father of 21st century famous international personality Dr. Tahir-ul-Qadri. He went to Damascus, Syria in 1966-1667 and saw this foot. He wrote detail about it in his Urdu book named "Safarnama" on page # 54. This book was published by Minhaj-ul-Quran in 1993. I'm writing translation from his Urdu book for your convenience:

Under foothills of Mount Qasioun is a village named "Akrad-e-Ayyubia". There is a tomb of "Baba Ayyub Tahir Kurdi" in the room in a garden. He was a true Muslim who participated in wars with Sultan Salahuddin Ayyubi (mercy be upon him) and got martyrdom. His tomb's location is near " Sheikh Mohiddin Mosque". There is also the tomb of his brother "Sheikh Salih Ayyub". Both brothers are syed ayyubia. His right foot is naked up to ankle and can be seen intact in fresh condition.

According to people of Syria, "Midhat Pasha" was appointed as the governor when Syria was captured by Turkish. Once, he was visiting various places of Damascus. When he visited tomb of Baba Ayyub Kurdi, he stood near his foot area. "Kurd are robbers and thieves", said the governor. "Who labeled them saint?" As soon as he said this, the right foot came out from the grave and kicked the governor so he died. After this incident, people of Syria tried to pushed back foot in the grave, but were unable to do so. So, the foot was covered with cotton wool up to shank.

The tomb is empty inside and there is a bulb near head side of grave in opening window. The foot of an alive human can still be seen today. The miracle of Sheikh Kurd is still present as a sign.

I also found a video speech in Urdu language by Mufti Ashraf-ul-Qadri (Gujrat, Pakistan) in which he told about details of the foot with reference of his student Moulana Abdul Rahman Naeemi.

Here is short summary in English of the event he explained:

Moulana Abdul Rahman Naeemi visited Damascus, Syria and went to shrine of Baba Ayyub Tahir Kurdi. While standing near the foot out from grave, he caught the foot and tried to pull fresh dead body of Baba Ayyub Kurdi out of grave, but in a sudden Baba Ayyub Kurdi pulled his foot back in grave up to a point where foot was barely visible that cannot be caught again. Moulana Abdul Rahman also took the nail through Muslim scholars of Damascus and gifted that nail to Mufti Ashraf-ul-Qadri.

The shrine of true Muslim martyr and saint Baba Sheikh Muhammad Ayyub Tahir Kurdi is in Damascus in Syria under foothills of Mount Qasioun in a garden in the area of 'Akrad-Ayyubia'. A Muslim named "Bilal Taha" gave me photo of entrance of this garden. According to my further research, this place is located on "Asaduddin Road" near "Abo El Nour Mosque". And, Abo El Nour mosque is near famous shrine of "Sheikh Mohiddin Mosque" which is on "Abdul Ghani Anabulsi" road. Here are some images gathered through Google map. So, What Does the Foot Prove?

This is an irrefutable miracle of Allah for disbelievers on earth because it has been more than 700 years since Baba Ayyub Kurdi passed away.

After having so much evidence, location of shrine, validation of address, etc and confirmation by Muslims from Damascus regarding foot of Baba Ayyub Kurdi that was mentioned in a book 50 years ago proved that even though the narration of storytelling is a bit different, but the event of foot out from grave is true. If you still don't believe on our research, then go travel to Damascus in Syria and research yourself.

Lastly, I would like to say that even the miracles of prophet Muhammad (peace be upon him) had no value for the deniers and disbelievers so this proof of Baba Ayyub Kurd's foot out from grave will have no value if you are intransigent and stubborn non-Muslim. However, if you are a truth seeker, then it is an irrefutable and observable proof on truth of God of Islam the Allah.

The Challenge to Non-Muslims

Can you Non-Muslims refute this natural proof on truth of Islam on world media?

The Invitation to Non-Muslims

I invite five billion Non-Muslims of the world to accept the truth of religion Islam and enter in it before their death after knowing this proof to be successful in life hereafter.